My lab is focused on identifying and functionally characterizing proteins containing fifty or fewer amino acids. The prevalence and physiological function of such small proteins are poorly understood in any organism. To address these biological questions, we are using the model bacterium Escherichia coli. We have recently found that E. coli contains many more small proteins than had been previously predicted. Further analysis has shown that many of these proteins are expressed under specific environmental conditions, suggesting that they have interesting functions in the cell. Our current goals include continuing to characterize small protein function in E. coli, in particular those small proteins that are predicted to span the membrane with a single hydrophobic a helix. These transmembrane small proteins make up the majority of small proteins identified in E. coli, and could be performing a wide range of functions at the membrane. Ultimately, the information we learn about E. coli small proteins will provide a foundation for investigating small protein abundance and function in both other bacteria species and eukaryotes. 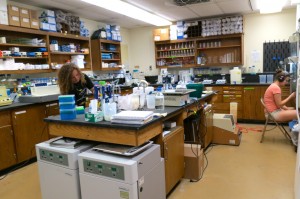